Home » How to DO » Battery » Lithium Ion Battery
Battery

What is a Li-ion battery and how does it work? 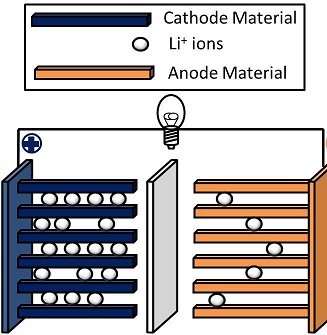 A lithium-ion battery is an advanced battery technology that uses lithium ions as a key component of its electrochemistry. During a discharge cycle, lithium atoms in the anode are ionized and separated from their electrons. The lithium ions move from the anode and pass through the electrolyte until they reach the cathode, where they recombine with their electrons and electrically neutralize. The lithium ions are small enough to be able to move through a micro-permeable separator between the anode and cathode. In part because of lithium’s small size (third only to hydrogen and helium), li-ion batteries are capable of having a very high voltage and charge storage per unit mass and unit volume.

Lithium-ion batteries can use a number of different materials as electrodes. The most common combination is that of lithium cobalt oxide (cathode) and graphite (anode), which is most commonly found in portable electronic devices such as cellphones and laptops. Other cathode materials include lithium manganese oxide (used in hybrid electric and electric automobiles) and lithium iron phosphate. Li-ion batteries typically use ether (a class of organic compounds) as an electrolyte.

What are some advantages to Li-ion batteries?

Compared to the other high-quality rechargeable battery technologies (Nickel-Cadmium or Nickel-Metal-Hydroxide), Li-ion batteries have a number of advantages. They have one of the highest energy densities of any battery technology today (100-265 Wh/kg or 250-670 Wh/L). In addition, Li-ion battery cells can deliver up to 3.6 Volts, 3 times higher than technologies such as NiCad or NiMH. This means that they can deliver large amounts of current for high-power applications, which has Li-ion batteries are also comparatively low maintenance, and do not require scheduled cycling to maintain their battery life. Li-ion batteries have no memory effect, a detrimental process where repeated partial discharge/charge cycles can cause a battery to ‘remember’ a lower capacity. This is an advantage over both NiCad and NiMH, which display this effect. Li-ion batteries also have low self-discharge rate of around 1.5-2% per month. They do not contain toxic cadmium, which makes them easier to dispose of than NiCad batteries.

Due to these advantages, Li-ion batteries have displaced NiCad batteries as the market leader in portable electronic devices (such as smartphones and laptops). Li-ion batteries are also used to power electrical systems for some aerospace applications, notable in the new and more environmentally friendly Boeing 787, where weight is a significant cost factor. From a clean energy perspective, much of the promise of Li-ion technology comes from their potential applications in battery-powered cars. Currently, the bestselling electric cars, the Nissan Leaf and the Tesla Model S, both use Li-ion batteries as their primary fuel source.

What are some disadvantages of Li-ion batteries?

Despite their technological promise, Li-ion batteries still have a number of shortcomings, particularly with regards to safety. Li-ion batteries have a tendency to overheat, and can be damaged at high voltages. In some cases this can lead to thermal runaway and combustion. This has caused significant problems, notably the grounding of the Boeing 787 fleet after onboard battery fires were reported. Because of the risks associated with these batteries, a number of shipping companies refuse to perform bulk shipments of batteries by plane. Li-ion batteries require safety mechanisms to limit voltage and internal pressures, which can increase weight and limit performance in some cases. Li-ion batteries are also subject to aging, meaning that they can lose capacity and frequently fail after a number of years. Another factor limiting their widespread adoption is their cost, which is around 40% higher than Ni-Cd. Addressing these issues is a key component for current research into the technology. Finally, despite the high energy density of li-ion compared to other kinds of batteries, they are still around a hundred times less energy dense than gasoline (which contains 12,700 Wh/kg by mass or 8760 Wh/L volume).

What is the CEI’s contribution?

One way that the CEI has worked to accomplish this is through direct imaging, specifically using x-ray spectroscopy. Recently, Professor Jerry Seidler’s lab has developed an x-ray. The technique can allow relatively detailed measurements of certain characteristics of a battery’s internal state, without having to open it and thus disrupt the system. Previously, XANES could only be accomplished with an extremely high radiative flux, from instruments such as a synchrotron. These are extremely large, expensive facilities, costing up to $1 billion, and are in such high demand among scientists that months-long waiting lists are the norm. Taking advantage of new, cutting-edge optical technologies, Seidler’s lab has been able to fabricate a small, $25,000 instrument that can mimic the measurements taken at a synchrotron. With this new instrument, scientists can have results in hours without significant waiting time, greatly increasing the speed of development for contingent technologies.

Another aspect of CEI battery research involves creating physical, mathematical and computational models for the battery’s internal states. This can help both optimize battery performance and charge/discharge cycles, as well as help predict and prevent dangerous battery failures. Professor Venkat Subramanian, who runs the Modeling, Analysis and Process-control Laboratory for Electrochemical Systems (M.A.P.L.E.), develops and reformulates physical battery models, and works on methods to simulate and solve these models with greater efficiency and accuracy. By providing a more effective, versatile and accurate model for Li-ion battery technology, M.A.P.L.E. lab’s research can help design batteries more precisely, for safer and more efficient operation.

Much of the CEI’s current research involves developing ways to better understand and manipulate the crucial internal states of li-ion batteries. Understanding the inner workings of the battery is instrumental for improving designs and evaluating its failure modes.

Another large component of CEI research involves the development of novel materials to improve battery performance. CEI’s focus includes both high-level materials science, such as the development and substitution of alternative materials into the li-ion battery, as well as characterization and design of nano-structured materials, or materials whose properties are determined even at nano-scale precision. CEI researchers are also exploring materials that could offer alternatives to li-ion battery technologies.

Silicon is being investigated as an anode material because it can form a 3D cage that has more capacity to absorb lithium. See the poster below.

“Batteries in a Portable World – A Handbook on Rechargeable Batteries for Non-Engineers” published by the founder of Cadex Electronics Inc. The website has notes for the book.  http://www.buchmann.ca/buchmann/

How to Make Cylindrical Cell

How to Make Pouch Cell